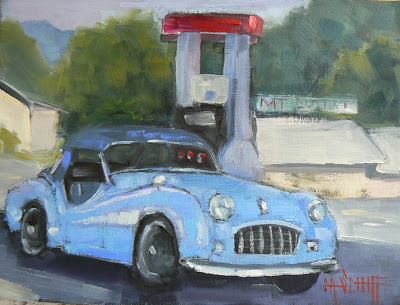 Last month I was sitting in the car, waiting for my husband, when this beautiful, sparkling TR-3 pulled up.  Everyone loves a nice vintage car, one look at this one and I was 17 again. 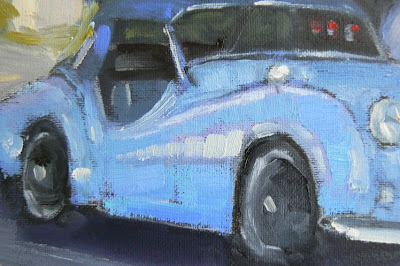 My TR-3 was white, not blue, and it was not reconditioned, but rather shabby.  It was my first car and as soon as I sat in the leather seat and flipped down the top, I was in heaven!  What more could you ask for? 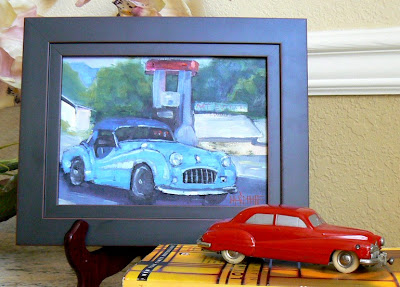 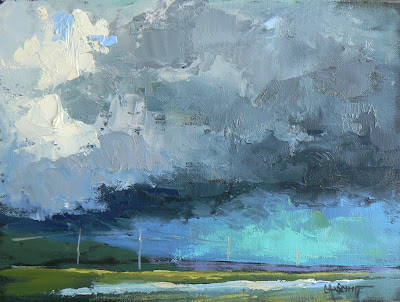 Storms can be very scary...when you are driving, when the sky is full of lightening,when the wind gets crazy, when that loud house-shaking thunder fills the air. 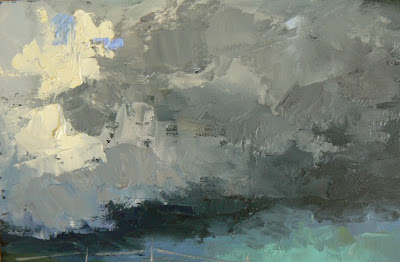 But, I love to paint storm clouds, the bigger and blacker, the better!  It gives me a chance to throw paint around and get wild!

Posted by Carol Schiff Daily Painting at 2:00 AM 14 comments: 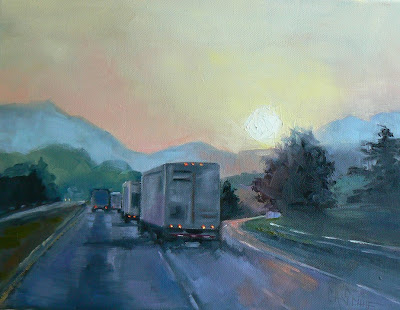 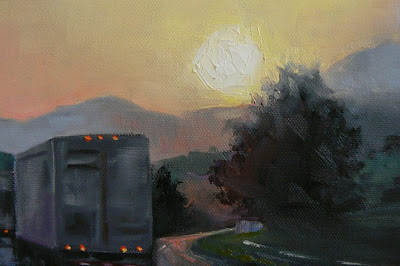 Heading east on 1-40, out of Asheville, North Carolina. 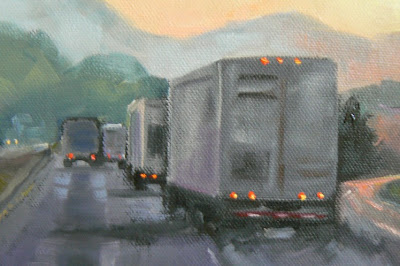 We travel from Florida to North Carolina and back from March to November, so this is a scene I am very familiar with.  This particular morning, in late August, the sun had just popped over the edge of the mountain and bathed the sky in light, while the valley below was still dark. 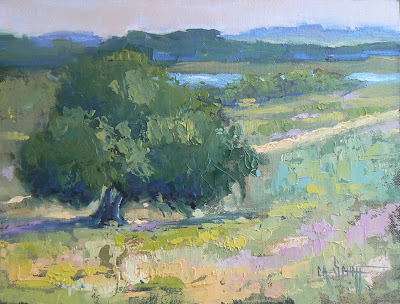 Fort Pulaski was prepared for a possible infantry attack. However, Fort Pulaski never endured a direct land assault. With 36 guns, including the new James Rifled Cannon and Parrott rifles, Union troops began a long sustained bombardment of Fort Pulaski. The rifled projectiles could be accurately fired farther (4–5 miles) than the larger and heavier smoothbore cannonballs. Within 30 hours, the new rifled cannon had breached one of the fort's corner walls. Shells now passed through the fort dangerously close to the Fort's main powder magazine. Reluctantly, Colonel Olmstead surrendered the fort. Only one Confederate soldier and one Union soldier were injured in the attack.
Within six weeks of the surrender, Union forces repaired the Fort and all shipping in and out of Savannah ceased. The loss of Savannah as a viable Confederate port crippled the Southern war effort. With the Fort securely in Union control, General David Hunter, commander of the Union garrison issued General Order Number Eleven, which stated that all slaves in Florida, Georgia, and South Carolina were now free. President Abraham Lincoln quickly rescinded the order, but later issued his own Emancipation Proclamation in 1863. At this time, Fort Pulaski was made a final destination on the Underground Railroad as slaves throughout the area were freed upon arrival on Cockspur Island. 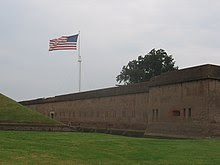 Outer wall of the fort.

Entrance to Fort Pulaski.
The garrison of Union soldiers reached 600 during the initial occupation, but as the War dragged on it became obvious the Southern forces would not be able to retake the Fort. The garrison was later reduced to around 250. Late in the War the Fort would be made into a prison for a group of captured Confederate officers known as "The Immortal Six Hundred." Thirteen of these men would die at the Fort. After the War ended Fort Pulaski continued as a military and political prison for a short while. It would house a Confederate Secretary of State, Secretary of the Treasury, Secretary of War, Assistant Secretary of War as well as three state governors, a senator and the man who had commanded the Fort after it had been taken by the South. 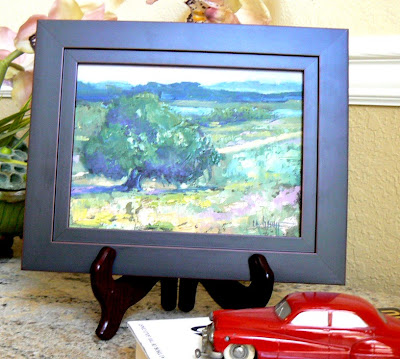 This was the view seen  as the confederate soldiers tried in vain to defend their fort.  There was never another brick fort built after this defeat. 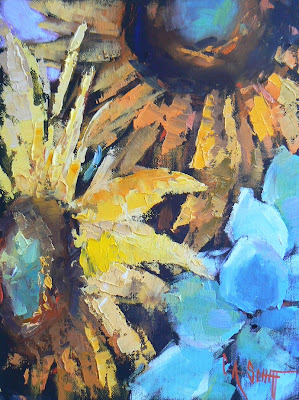 Sunflower,
Good mornin'
You sure do make it a sunny day! 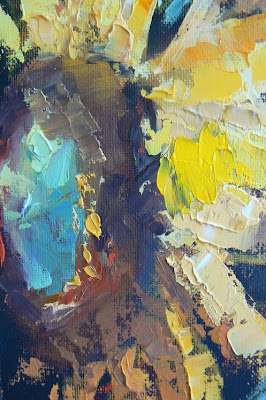 I have been enjoying the palette knife lately!  So much fun. 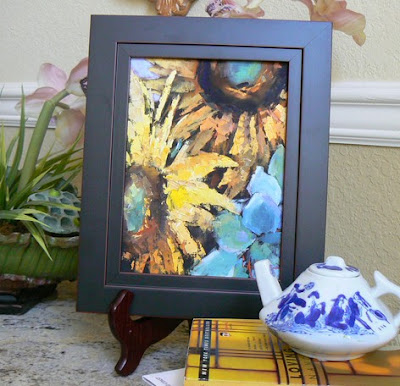 I hope your day brings you sunflowers!

This painting has been licensed and reproduced as a hand-distressed solid wood plank wall decor. 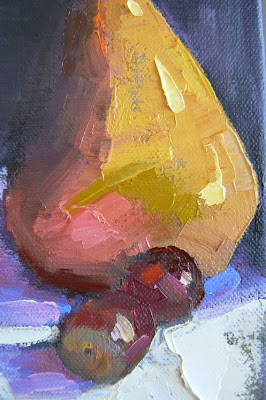 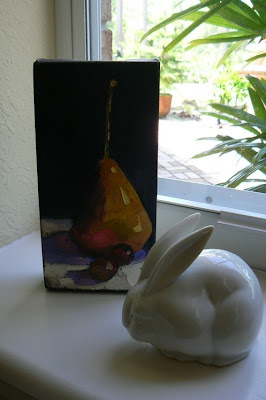 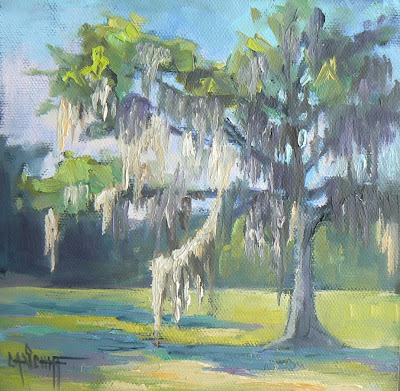 Live oak trees are found everywhere in the south, usually, draped with Spanish moss.  The trees are huge with long, long branches that sometimes droop to the ground.  They are called "live oaks" because they cycle their new leaves all year long and never are bare. 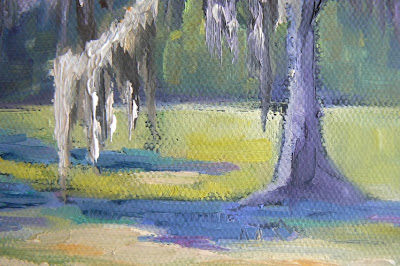 Spanish moss was named after the first Spanish explorers who came to Louisiana and Florida.  The Indians thought the moss looked like the beards of the explorers. 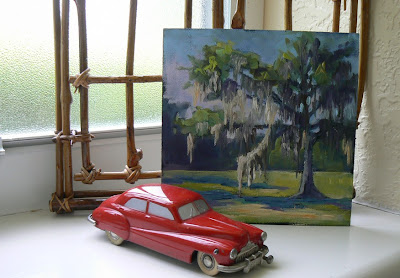 Basically, Spanish moss just needs somewhere to hang out, and live oak foliage leaches an especially high amount of the nutrients it needs. While excessive growths of Spanish moss can be problematic for unhealthy trees in high wind situations, in most cases healthy live oaks have extensive root structures that keep them in place during storms.
Spanish moss is great for wildlife. Birds use it for nesting material, and it provides shelter for creatures like bats and bugs, including a type of spider that’s been found nowhere else. Throughout history, humans have used it to stuff mattresses, as packing material and insulation, and even in the car seats of some of the first Fords. (This proved to be a problem when the red ants living in the Spanish moss made their presence known – they solved this problem in the future by boiling the moss first.)
So really, y’all, there’s no reason for southern nature and wildlife lovers not to like Spanish moss just as much as the stately tree that it hangs in.
Purchase here
$65

Posted by Carol Schiff Daily Painting at 8:09 AM 7 comments:

OUR ENGLAND IS A GARDEN, 6X8, Oil, Canvas Board 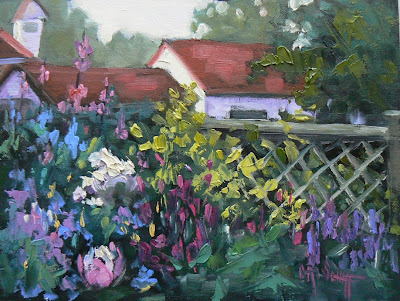 Our England is a garden,
and such gardens are not made
by singing "Oh, how beautiful",
and sitting in the shade.


Rudyard Kipling
The Glory of the Garden 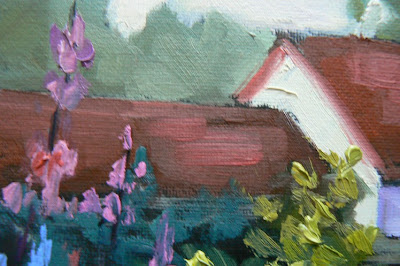 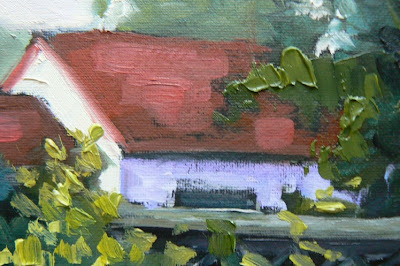 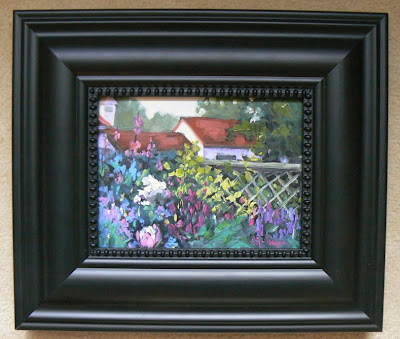 Posted by Carol Schiff Daily Painting at 2:00 AM 10 comments: 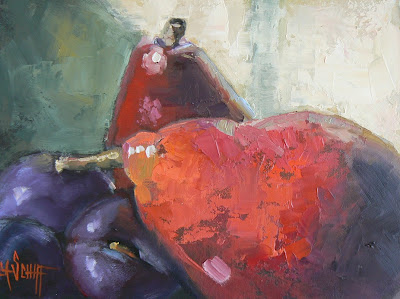 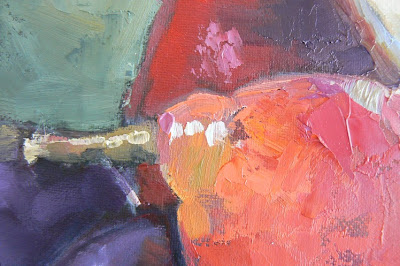 If you want to be an artist, you must eat the pear.  Paint, paint, paint.  And then paint some more. 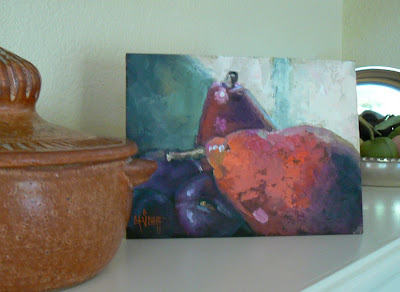 
Posted by Carol Schiff Daily Painting at 5:27 AM 9 comments: